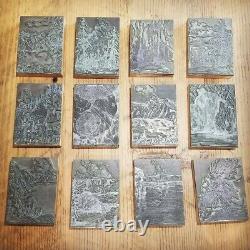 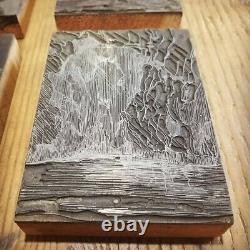 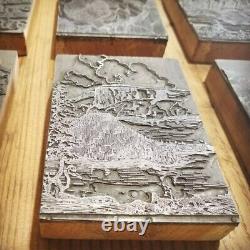 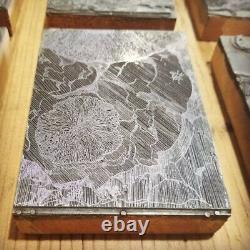 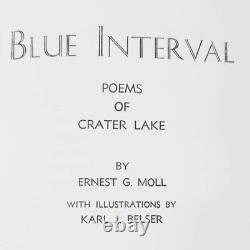 Blue Interval: Poems of Crater Lake. Illustrated by Karl J Belser. Gerry Moll was an Oregon poet of the mid-twentieth century who served on the University of Oregon faculty for thirty-eight years. His collections Blue Interval and Campus Sonnets are about Oregon, and his years at the university are memorialized by a faculty research award named in his honor. He received the university's medal for distinguished academic service upon his retirement in 1966.

Moll was born in Murtoa, Victoria, Australia, on August 25, 1900. He attended Concordia College in Adelaide, South Australia, before moving to Appleton, Wisconsin, where he graduated from Lawrence College in in 1922. He obtained a master of arts degree at Harvard University in 1923 and traveled in Europe and Australia before accepting a teaching position at Colorado College in the late 1920s. In 1928, Moll was appointed assistant professor of English at the University of Oregon, where he taught until his retirement in 1966. He married Nieva Remington on September 24, 1927; they had two children. Moll's 1935 collection of poems, Blue Interval (reissued with additional material in 2017), consists of rhymed quatrains that are related to the history and physical aspects of Crater Lake. Where he worked for two summers as a ranger-guide.

His sonnet sequence Briseis looks at the battle of Troy from the point of view of a main female characters. Australian writer Frank Dally Davidson noted that Moll's work has a scriptural simplicity of statement, with great richness of connotation. Moll's work as a poet drew the attention of several anthologists of twentieth-century Oregon literary work. The 1942 edition of Northwest Books, for example, noted that Blue Interval described the blue lake and rugged mountains, the eroded slopes and stalwart hemlocks, the days' light and nights' mystery as timeless objects untouched by man's mortality. Alfred Powers, in his History of Oregon Literature (1935), listed Moll's work among younger contemporary poets and published an excerpt from Campus Sonnets, a 1934 collection based on life at the University of Oregon.

In 1959, Oregon Signatures, a 1959 collection of the work of Oregon poets, included nine of Moll's poems alongside those of William Stafford. From Here We Speak: An Anthology of Oregon Poetry (1993), edited by Primus St.

John and Ingrid Wendt, included Moll as a significant Oregon poet and reprinted his poem Sheep-killer. Moll's iconic collection about life in rural Australia, Cut From Mulga (1940), won best literary book of the year in Australia, recommended for the honor by Prime Minister Robert Menzies.

Of the eighteen collections that Moll published, eight were published in Australia. This divided legacy extends to his papers, some at the University of Oregon and the bulk, some sixteen boxes, at the National Library of Australia in Canberra. The collection includes unpublished poetry and letters and clippings about Moll. His poetic reputation may have been limited because of this split, since his full output was not easily visible to the readers in either nation and he tended to use smaller publishers and print shops late in his career. In addition to writing poetry, he published a guide to the form, The Appreciation of Poetry, in 1933.

After retirement, he established a greenhouse in Brookings. On the south Oregon Coast, where he raised Australian plants. He died in Oroville, California, in 1997. Original printing plates from the Binford and Mort publishing company collection 1935. This item is in the category "Business & Industrial\Printing & Graphic Arts\Printing & Graphic Essentials\Type, Cuts & Printing Blocks".